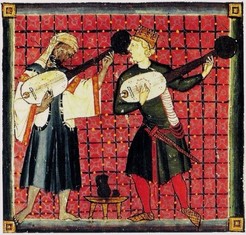 The international congress “The Mediterranean and the Iberian South in the medieval age: Culture, Identity and Heritage (V - XV centuries)” will take place in the city of Évora, on 5 and 6 December 2013, marking the 1100 years since the plunder of the city by King Ordonho II, which occurred in the year 913.

The meeting will primarily aim to bring together young researchers and experts from Portugal, but also from other countries, from fields as diverse as Archaeology, History, Art History, Literature, Anthropology, among others, which are devoted to the study of issues related to the Iberian South in medieval times. The main purpose is, therefore, always from a multidisciplinary perspective, to analyze the relations of proximity and affinities that existed between the southern regions of the Iberian Peninsula and the Mediterranean area, in the medieval context, but also any other issues related to specific aspects of art, economic, political and social history, or Culture or Mentalities in the Iberian South, provided that they fall within the chronological scope of the congress.

Is important to emphasize that, in the context of this academic congress, the Iberian South is understood as an extended space, without definite geographical boundaries, culturally unified by a common Mediterranean matrix, but with the specificities of a territory where, during the medieval period (that is, during the period between the fifth century and the late fifteenth century), Christians, Muslims and Jews coexisted side by side, mutually influencing each other.